The longest-running blues festival in the Bay Area was born at San Jose State University in 1981 from an idea hatched by the student directors of the Associated Students organization. 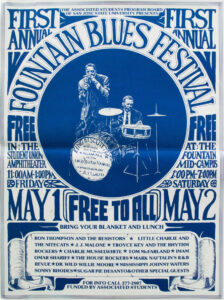 They wanted to put on a free festival as a gift to their fellow students who had attended concerts throughout the year. These organizers picked the blues as the focus of their inaugural spring festival, reasoning that the blues cut across every demographic line known to man, that there were few opportunities to hear live blues in San Jose, and perhaps most importantly for a free student-run festival, that blues acts can be booked on a slim budget.  They named the festival after the fountain on SJSU’s Tower Lawn and welcomed both students and community members.

The first festival featured prominent Bay Area acts:  Ron Thompson and the Resisters, Little Charlie & the Nitecats, J.J. Malone, Troyce Key and the Rhythm Rockers, Charlie Musselwhite, Tom McFarland, Imam Omar Shariff (formerly known as Dave Alexander), The House Rockers, the Mark Naftalin Rhythm & Blues Revue, Dr. Wild Willie Moore, Mississippi Johnny Waters, Sonny Rhodes, and Sugar Pie DeSanto.  To the organizers’ surprise, the festival drew 1,000 fans who, as students’ advisor Ted Gehrke said, “just seemed to have a grand time of it.”  Energized by the success of the first Fountain Blues Festival, the students hired the legendary John Lee Hooker as the headliner the second year, and more than doubled the attendance.  Under Gehrke’s guidance, the San Jose State students continued to produce the festival on the university’s campus for the next 30 years, booking the biggest names in the blues and introducing thousands of students to what B.B. King has called “the mother of American music” — the blues. Admission to the festival was free until the last few years at SJSU, when the students instituted a minimal admission charge.

In 1997, the festival’s fate was threatened by financial reorganization at SJSU, but Metro Newspapers rescued the festival by signing on as the presenting sponsor.  Metro remained a sponsor for many years, thus, in Gehrke’s words, “saving the blues for San Jose.”  The festival faced extinction again in 2010, due to a state-wise budget crisis.  As a consequence, the Associated Students organization was unable to continue as the festival’s main sponsor.  But after 30 years of bringing the blues to San Jose, Gehrke was unwilling to give up on the festival.  He put the word out that the festival was in danger of dying, beating the bush tirelessly for saviors and sponsors.  His tenacity paid off when an anonymous sponsor with a deep love of the blues came forward, and in July 2011 the festival was able to continue at new digs at St. James Park. For several years thereafter, the festival relied on alliances with the San Jose Downtown Association and San Jose Jazz to deliver first-rate blues performances to downtown San Jose.

After the 2013 festival, the event took a year off so that Gehrke, with the help of loyal sponsors and volunteers, could regroup and create a new organization designed to ensure the long-term survival of the festival. They established The Fountain Blues Foundation, a nonprofit corporation that produces the festival, now known as the Fountain Blues &amp; Brews Festival, as well as other blues-focused events.  The Foundation, whose all-volunteer board of directors includes some of the same folks who organized the very first SJSU blues festivals while they were students, has produced the festival since 2014, moving the festival to its new home at Plaza de Cesar Chavez in 2015.  Just like the blues, which Gary Clark Jr., tells us “is not going anywhere,” the San Jose Fountain Blues &amp; Brews Festival is here to stay.

The directors of the Fountain Blues Foundation intend to continue the legacy of Ted Gehrke, the festival’s founder, and self-proclaimed “Chief Whizbang,” and plan to produce the Fountain Blues and Brews Festival for many years to come.